Fables is a comic book series that was recommended to me by my co-worker Erick. You may remember him from the Pokemon Battledome post where he composed a team that was built to hit hard! To sum up the theme of Fables, if you have ever watched ABC’s Once Upon A Time Series, the premise is similar; Fairy Tale characters are dropped into the modern world. But instead of the quiet, town of Storybrooke which outsiders can neither see nor visit, the characters are living amongst real people in New York City! They take on new identities and try to make their way in the world while concealing their true identities. Sit back and enjoy this multi-series review (Spoiler Free of Course) of Fables: The Deluxe Edition Book One!

Once Upon A Time… Imagine that all the characters from the world’s most beloved storybooks were real – real, and living among us, withall of their powers intact. How would they cope with life in our mundane, un-magical reality?

The answer can be found in Fables, Bill willingham’s celebrated re-imagining of the venerable fairy tale canon. From Snow White and the Big Bad Wolf to Goldilocks and Little Boy Blue, the folk tales of old are reborn here as exiles living in the magically camouflaged New York City neighborhood of Fablestown. 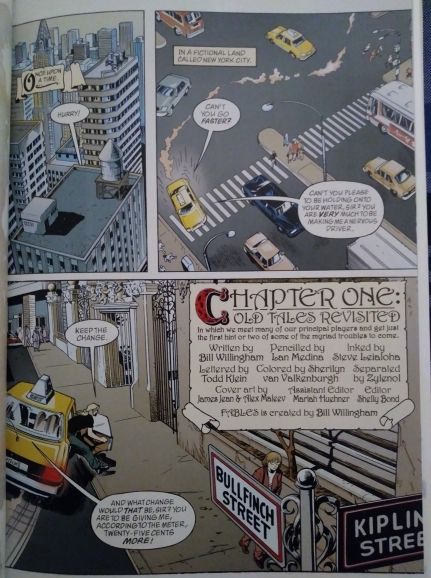 Story# 1 – The Book One series consists of 10 stories that seem to all connect. The first story introduces us to a few characters that are assessing their problems. We join the detective B. Wolf on his investigation of a missing person’s report. Jack’s (from Jack and the Beanstalk) girlfriend is missing and he enlists the help of Detective Wolf. Along with the investigation, other members of the community show their cards and their assumed persona in this new world.

Graphics & Art: One of my biggest draws to the comic is the artwork. There are 4 different artists that contribute to drafting and creating the Fables world. The comic looks less like a comic and more like an art exhibit when you turn each page.

“But YOU try being married for almost a thousand years without a few ups and downs along the way.” -Belle

“Nothing more to eat or drink miss. But we;ve shared such a nice flirtation this afternoon that I’m tempted to ask you for your phone number.” – Prince Charming 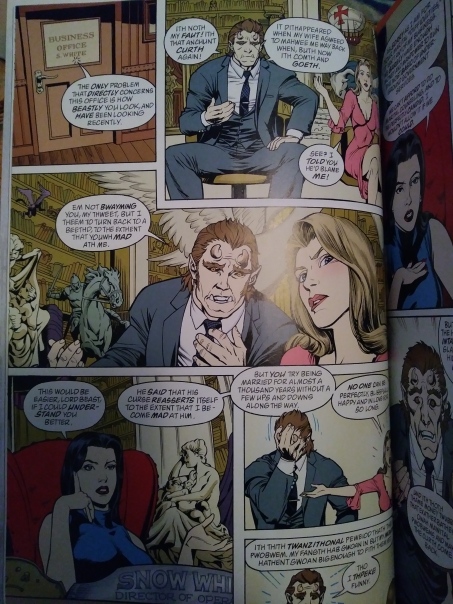 Final Thoughts: What I love is that each character has a job and a role in their community of fairy tale creatures. I feel like the Big Bad Wolf is an excellent detective with his primal instincts. Think about it. In interrogations he can use his instincts and intimidation to get confessions and he is a bloodhound so sniffing out clues would be super easy. We also meet Snow White, Belle and the Beast in this first story, each having their own problems and concerns. What has happened to Jack’s Girlfriend? Who is behind the mysterious disappearance (if anyone)? What can we expect from series 2?

Since I am reviewing all 10 chapters, I will hold off my overall rating of the comic until the final chapter has been reviewed. Have you read the Fables collection? What comics are you currently reading? Let’s talk comics! 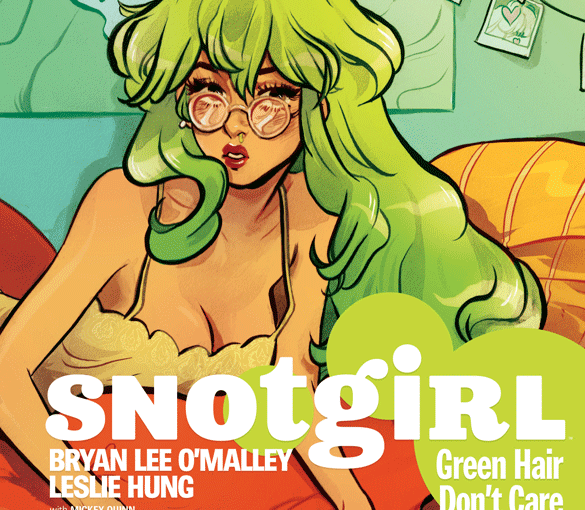 Happy Tuesday Novas! Thank you for tuning in to my very first Comic Review! My coworkers and I are in a so called “Comic Club” in which we each purchase comics and then let each other read them. We talk about the issue and decide if we want to continue the series or not. Selena was up and she picked a comic that was SO HER! The volume that she bought contained 6 issues of the story (it ends on a cliffhanger!) and I have completed  reading it and would like to share my thoughts!

Lottie Person is a glamourous fashion blogger living her best life- at least that’s what she wants you to think. The truth is, her allergies are out of control, her friends are terrible people, her boyfriend traded her up for someone younger, and she may or may not have killed somebody! It’s the first volume of Snotgirl, and things will never be the same!

I definitely enjoyed the first volume of snotgirl. You’re left trying to put a few pieces together and really, nothing is explained. It’s great becuase it keeps the reader engaged in everything going on and I couldn’t stp turning the pages.  Lottie is a well known fashion blogger, but what is her like really like? Sure, she knows about the latest trends and are invited to all of the best parties, but what is life like behind the blog.? It’s like a VH1 Behind the Music Special and I can tell you, her life is nothing like it seems!

The characters in the comic are not really relatable. They are exaggerated versions of what one would think the world of a fashion blogger and their friends would be. Lottie gives nicknames to everyone she meets and these names are representations of how Lottie views the person. You will read names like Normgirl and Cutegirl come up often.

The art is beautiful in my opinion. The bright and vibrant color scheme reflects the modern and trendy  personality of the main character, Lottie. The character personalizations are pretty well detailed and I like that each character has their own personal style.

Something hat I think can be improved are the transitions from one scene to the other. I’m not sure if it’s because I’m not fluent in reading comics, but some transitions seemed a little sudden. It was as if there should have been 1 or 2 more panels of dialogue before the next scene started. Also, the comic is marketed towards a specific demographic. The use of emoji’s and socail media language is widely integrated.

As with any review that I write on the blog, I would like to provide my top reasons to “Play” or read the comic and my reasons you might want to “Skip” this series.

Thank you for reading my first comic review! What are your thoughts on Colume 1 of Snotgirl? Have you read or heard of this series? What comics are you currently reading? Let’s talk comics and graphic novels!