Power -up players for the 1st First Impressions post of 2018, on my very first Final Fantasy Game EVER: Final Fantasy XIV Online. I’ve mentioned before that I have never played any of the Final Fantasy games, mainly because when they were first released, they were turn based RPG Games that I did not care for. After reading great posts by my blogging buddies The Shameful Narcissist and Lightning Ellen, I have been more open to the idea of playing Final Fantasy games. My online gaming group have been sending me deals for Final Fantasy XIV online and I finally gave in!

Something that I am aware of is the excellent storytelling in the World of Final Fantasy. FFXIV does it’s predecessors proud by offering an immersive story! You start as a wanderer who is summoned by a supernatural force. Your character is given gifts in which you will use to help save the land.  The story starts on a ship and everyone in the land that I have started in is a pirate. I have to admit, reading so of that slang tripped me up a bit.

The gameplay is pretty fun. There’s a lot of dialogue that you can opty to read or if you’re in the mood for a fun tory, you can read to fully immerse yourself in the Final Fantasy world. When I stream the game on Twitch or record my gameplay, I have fun and read the dialogue in different voices. I am currently playing FFXIV on PC, so the controls are standard for a RPG game. With PC one of the luxuries are the ability to keybind skills or actions to your playstyle, but I find the preset keys work well in FFXIV Online.

The game is beautiful. On my gaming PC the colors are vibrant and smooth. They blend together really well and I can finally say that I am starting to become a graphics type of girl when it comes to my video games. I really enjoy the soundtrack and music in FFXIV. I love when a game’s music can shift my mood. You can tell when a big fight is about to break out when the music changes dramatically and you are no longer listening to the melodic, happy tune while you were traveling.

There are a few different classes that you can select to play with your character. Each class, has one of 3 starting locations: Ul’dah, Limsa Lominsa and . There are the traditional roles of Tank, DPS and Healer which will depend on the class that you select. I love magical damage classes, so I selected the Arcanist. The Arcanist can evolve into a Summoner or Scholar so you pretty much have the best of both worlds. I can heal and distribute magical damage with the Arcanist class.

One of the perks of my class is that I can Summon a creature (in the form of a cute electric blue fox) who can guard me, fight for me or even heal for me. I have a tank version of this pet as well so while running dungeons (or solo multi entity quests) I summon my creature and have him pull aggro. Sometimes he gets out of control and I have to send him away as 20 enemies run towards me lol. 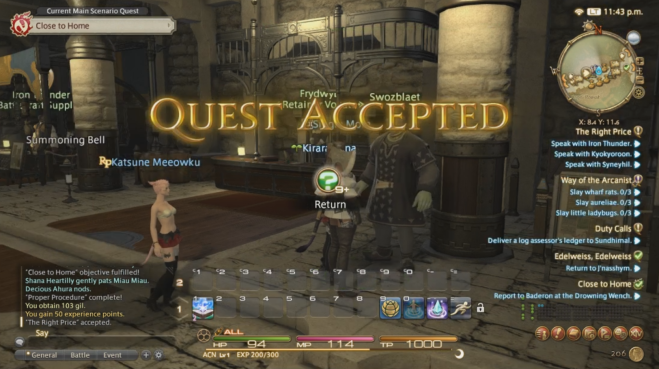 I purchased the complete edition of the game that included the 2 DLC’s. This makes the game MASSIVE! I’m in the first DLC and progressing through that story now and boy is it grindy. I played all day on Wednesday and I’m only level 18, Yikes! I like it though, there are a variety of missions from collecting items, to finding and talking to NPC’s to exterminating creatures. Each quest will have something a bit different to keep you playing and pushing through the grind.

Other than the main and side quests, you can level your characters in a variety of ways. You can attack higher level creature in the world and XP will be gained for each kill (although you obtain more experience when you complete quests). There are instances know as “Fate’s” that you can plan to gain experience, money (gil) and items. Fates will be marked with a purple circle on your map. Each Fate has a requirement to complete (mostly to destroy a certain number of creatures in a specified time) before the instance disappears. Fate’s are the equivalent of World Events in Destiny 2 where other players can team up to help complete the task quickly.

LeveQuests are another feature of the game in which you can level up your character. When you are a high enough level, you will be able to accept these mini quests that combine the features of the Fate events and quest items into 1. You will have a set task that you will need to complete and you are rewarded by the completion, difficulty and speed of your task.

Right now I am all in for Final Fantasy! There’s so much to do that it keeps me occupied. If I don’t want to run quests, I go and complete Fate’s or LeveQuests. I also train and upgrade my gear. There are dungeons and other multiplayer features of the game that I have not tried out yet. I can see myself playing this game for a few months. It’s a bit like any other RPG but it’s still fun to play alone or with friends. 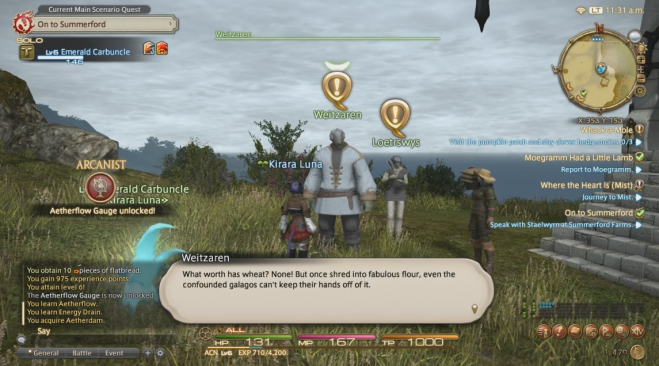 I am really enjoying the game at the moment. This is a great experience for my first Final Fantasy game and I anticipate playing for quite some time. I love that I am able to journey around and that there are plenty of activities to keep my interest. With the addion of seasonal events and DLC, I can see myself playing FFXIV online for the entire year. My gameplay of Final Fantasy XIV online was uploaded this morning to our YouTube channel. Click here to watch!

I give Final Fantasy XIV Online 4 out of 5 Power Ups!

Wheew! That was a lot of information for a First Impressions post, but Final Fantasy XIV Online is a truly massive game. I may start writing monthly updates on the game regarding the current events or new features that I have tried. Have you played FFXIV online? Which class do you play or like to play in RPG’s? Let’s talk RPGs!