Hiya Gamers, Geeks & Friends! Welcome to week 3 of the Hidden Treasures weekly post (click here to view Hidden Treasure 1: iZombie or here for Hidden Treasures 2: Nerve ). To familiarize you with the post, each Monday I will talk about an item that I believe is “Overlooked” and should have the attention of more people. This section can range from Video Games to Movies or Series. There overview done, now let’s get to this week’s topic the “Allegiant” movie. Before you decide to stop reading, hear me out on this movie and why I think that more people should give it a chance. I have read the Divergent, Insurgent and Allegiant books by Veronica Roth. I was very excited when the films were being released and Divergent was one of my first film reviews (maybe I’ll post that review one day). This was the first time that I had read the book first and then watched the movie.

Allegiant is the 3rd movie in the Divergent Series (both the film and books). Divergent is the story of Tris and others who are raised in the post dystopian city of Chicago. The world as we know it is in ruin and the city of Chicago built up walls and a fence to guard against anything negative beyond the wall (sounds like Game of Thrones doesn’t it :-p). To keep the city and people under control they are divided into 5 factions in which the personalities of each individual will be utilized to further the succession of the city. 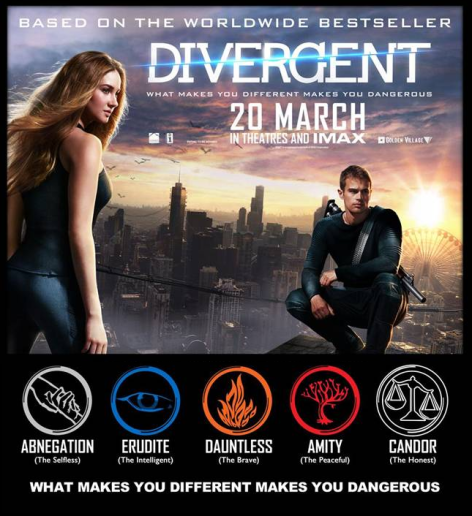 These factions are Candor ( The Honest), Abnegation (The Selfless), Erudite (The Intelligent), Dauntless (The Brave) and Amity (The Peaceful). Each one of these factions controlled an essential part of Chicago and allowed for the city to grow and prosper. The Candor controlled the courts, Abnegation ruled the government, Erudite were the Doctors and Scientists, Dauntless were the protectors and Amity were the farmers. Everyone co existed together harmoniously. So how were people placed in the factions you may ask? Well the teens had to take an aptitude test. The aptitude test that each citizen took as a teenager placed them in their correct faction in which they would live out their lives. This meant that some families would be broken up and the teens would go to live with their new “families.”

There were citizens who received test results placing them in more than 1 faction. This was considered being a Divergent as you did not fit into 1 category. Divergents are considered abominations and are sought out and disposed of. That’s the premise of the series. Now lets fast forward to the 3rd film Allegiant. Allegiant is the story of Tris and friends leaving their long time home in Chicago and heading out to see if there’s life beyond the wall. For 200 years they thought Chicago was the last surviving city and now they’re going to find a world beyond their comprehension. 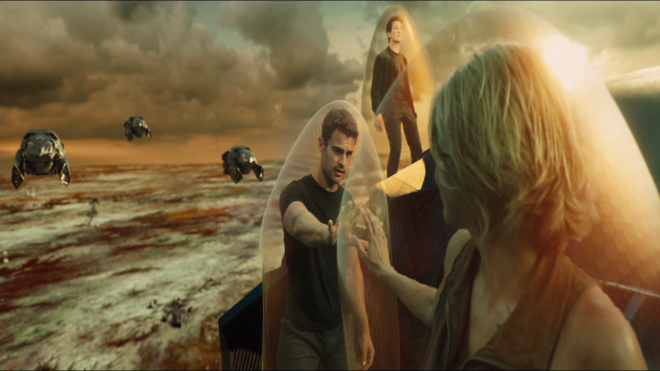 The journey will even finally reveal what being “Divergent” really means. How would you feel if everything you have ever known and believed was turned upside down? What would you do?

Allegiant is the 3rd film and did not get as many ratings as the 1st and 2nd films. I believe that the decline in attendance was caused by the 2nd film Insurgent. Insurgent had a pretty good turn out in theaters, however the movie didn’t follow the books as much as Divergent did. A few of the concepts were a little weird and they made the movie in 3D which didn’t help out with the story line. Allegiant actually stayed pretty true to the book. In my opinion it was very well portrayed, the action aligned well throughout the story and you are able to see the connections within each individual character (I’m being pretty vague here as I don’t want to spoil anything in case you decide to watch 🙂 ). The movie has action, mystery and a bit of romance.

All in all, watch the trailer and think about watching Allegiant! Do you really need to watch Insurgent and Divergent first? I would recommend watching Divergent for sure. Insurgent, even though it wasn’t as good you can still watch for more back story, however, as I have stated it veered away from the book so I don’t really think it is needed to be able to enjoy Allegiant. Take a look at the trailer below and then make your choice.

Thank you for tuning in to this week’s Hidden Treasures! What movies do you really enjoy but many people have not seen? Have you seen Allegiant? If so, what did you think about it compared to Divergent and Insurgent? Let’s talk Movies!

“I don’t want to be just one thing. I can’t be. I want to be brave, and I want to be selfless, intelligent, and honest and kind. Well, I’m still working on kind.” -Four. This quote is from Divergent I know, but it still relates to Allegiant.