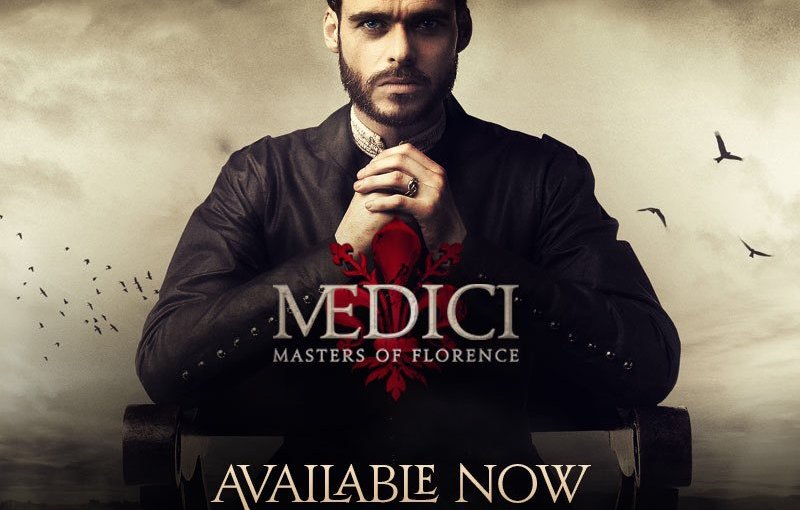 Hiya gamers, geeks and friends! Ever wanted to find a new Netflix binge worthy show to watch? Of course, you have! The purpose of this weekly blog post will be to view and review Netflix made series and provide my opinion on whether it is “Binge Worthy.” I will start off selecting some of the top recommendations from my personal Netflix queue however, I will be more than happy to take suggestions from the readers! If you have a series that you don’t want to get invested in until you have heard someone’s opinion, simply comment on the weekly post and I WILL watch and provide insight. This week’s post will be from a great period piece, Medici: Masters of Florence.

Once of the most influential families in Italy from the 13th century on would be the Medici family. In that time, Italy was pretty much divided in to factions more than as a whole. Florence is where the Medici family came into “power” and ruled the city through their intellect and let’s be honest, their money. The Medici’s were bankers that brokered deals to control trade and even the Pope’s shipments. With the amount of money the Medici’s procured, the same amount of influence and status followed. The interesting fact about this family and their rule was that the Medici’s alone did not have a crown or royal blood (through the family line they have bought their way into royalty). As we know, empires and dynasties are more commonly referred to Houses of Nobility and Royalty, yet the story of the Medici Family does not start from these enviable positions of status.

The series follows the life of Cosimo Medici and his brother Lorenzo. Cosimo is an artist, he indulges in beauty, art and the aesthetics while his brother Lorenzo is more of a loose cannon. Their father is getting set to pass the reigns of the Medici Bank (largest bank in Florence) over to one of his son’s. Though neither of the 2 particularly care for the banking life, Lorenzo and Cosimo compete for their father’s blessing. The series starts off with a mix of emotions and flashbacks through the 2 brothers lives. During the series you will notice little nuisances that will alert you to the “Flashback” happening such as the longer hair of the characters. Cosimo and Lorenzo must keep the family name and banking business from falling to the likes of politically corrupt characters, riots and religion. It’s a fantastic series even if you’re not into the whole period drama phase (as I most certainly am J). Surprisingly, the series will provide you with an ample amount of action (Plus watching the expressions on some of the characters faces when the wool is pulled is priceless) and more dramatic circumstances.

I guess here I should talk about the timeline and how true to the original story (Yes this is based off of the true lives of the Medici) the series gets. Most of the historical aspects of the series (buildings, schemes, etc.) are fairly accurate as I have researched it to make sure. There are a few places where you wonder if that person really exists (as there’s no mention of some characters) which is not an uncommon thing. History is written by the winners and people with the most influence. Whether characters were really in love with others below their station or not, there must be some amount of drama incorporated. If that means creating an insatiable, forbidden love, so be it.

Before I give my recommendation, I will admit that I have been drawn to the earlier century dramas such as Reign or The Tudors ß (would recommend, Henry VIII is crazyyy lol). Due to my current obsession, I would of course jump at the chance to watch another series of the same (especially since the Medici family is present in Reign). In my opinion the Netflix series of the Medici is a good one and 10 out of 10 would recommend (not that I am giving it a perfect 10 lol). Let me know your thoughts! If you have watched the series what was your impression of it? Next week the Netflix series discussed will be “Series of Unfortunate Events” which I hear is fantastic!

Have a great week!

6 thoughts on “Netflix Series of the Week- Medici: Masters of Florence”